I am pleased that the RICS Land Journal has published online an updated version of my article on the untapped potential for the waste and resource management sector to act as an enabler to unlock significant climate mitigation benefits across the economy. My best estimate of the mitigation potential is at least 15-20% of global carbon dioxide (equivalent) emissions, which is far beyond the IPCC’s estimate of 3% for the narrowly defined end-of-the linear-economy ‘waste’ sector, which is necessarily used in official climate reporting to avoid double counting.

This post supercedes that titled ‘COP26 and the waste and resource sector’, first published on 25 October 2022:

How much can better waste and resource management contribute to mitigating global heating? Prof David C Wilson addressed this question at the Policy Connect Sustainable Resource Forum seminar on October 11 2021. The answer with a high level of confidence is ‘significantly’, perhaps 15-20% of global carbon dioxide (equivalent) emissions. DCW has now written this up as a ‘thought piece’, making the case for prioritising actions at COP26 and beyond to improve waste and resource management and move towards the circular economy. This may be found as both an article and as a video interview on WasteAid’s COP26 online hub; as a feature on CIWM’s Circular Online; and as an ISWA guest blog. 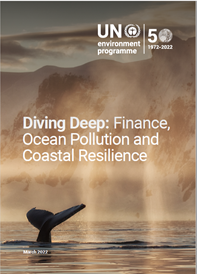 A key constraint to improving waste and resource management in many countries is a lack of access to investment finance. Extending waste collection to all and phasing out uncontrolled dumping and open burning in low-income countries would significantly cut the mass of plastics reaching the ocean. So the UNEP Finance Initiative publication Diving Deep, aimed at banks, insurers and institutional investors, is very welcome. Guidance is provided in the form of a science-based, actionable toolkit, to ensure that their investments, both in product manufacture and in waste management, encourage waste prevention and sound waste management, thus keeping plastics out of the oceans.

The promotional video and the document itself are worth looking at just for the wonderful images by world-renowned photographer Cristina Mittermeier of Sea Legacy. The guidance was prepared by WWF (led by Paula Chin) and RWA (led by Andy Whiteman). DCW played a small role as one of the reviewers.

In his July column, CIWM President David C Wilson makes the case for more investment in resource and waste management as an ‘entry point’ to achieve significant climate mitigation. The sector already has a track record in developed countries, with methane mitigation from landfill since the 1970s, and both methane mitigation and recycling making a major contribution to meeting Kyoto Convention greenhouse gas (GHG) reduction targets between 1990 and 2010. But that early success also means that the IPCC’s 2010 assessment is that the ‘waste’ sector only contributes 3-5% to current GHG emissions. DCW argues that this is a gross underestimate which fails to consider: the current emissions from uncontrolled burning; historical reductions; contributions across the economy from recycling; and waste prevention (particularly food waste).  The results suggest that better resource and waste management has the potential for reducing GHG emissions across the World economy by 15, 20 or 25% or even more. Such numbers may be guesstimates, but whatever number we choose to use, the message is still the same. Further investment in this sector, in both developing and developed countries, is a major political priority in order to meet our climate targets.

This article was subsequently re-published by the National Solid Waste  Association of India (NSWAI) in their member journal Waste Monitor in July 2019.

Waste and climate – an opportunity

STOP PRESS: DCW has been invited to speak at the All-Party Parliamentary Sustainable Resource Group (apsrg) seminar on ‘COP21 and Waste: Exploring the Resource Industry’s Potential of Contributing to Climate Change Mitigation’ at Westminster on 10 December 2015.

POSTED 09 November, 2015. In the run-up to the Paris summit on climate change, the search is on for short and medium term opportunities to achieve significant reductions in greenhouse gas (GHG) emission across the economy. Several recent reports have pointed to the potential for improved waste and resource management as one such ‘entry point’. Some major developed economies have already reduced total GHG emissions by 5% through reduction of methane emissions from landfill. Tackling food waste could reduce global GHG emissions by 9%. Overall, the recent UNEP Global Waste Management Outlook (edited by DCW) has estimated that improved waste and resource management has the potential to save 15-20% of global GHG emissions across the economy.

Waste management is a cross-cutting issue impacting on many aspects of society and the economy. The link between waste and climate is particularly important. Waste management is generally considered a small but important contributor to GHG emissions. Its direct contribution through methane (CH4) emissions from anaerobic decomposition of organic wastes at disposal sites was estimated by the Intergovernmental Panel on Climate Change (IPCC) at around 3% of total GHG emissions in 2010. However, this figure grossly underestimates the potential contribution of improved waste and resource management to global GHG mitigation, both because it ignores savings already made prior to 2010, and because the IPCC has used a very narrow definition of the ‘waste sector’.

Planet-wide MSW generation in 2010 was dominated by high-income countries, which had already substantially reduced methane emissions from landfills. For example, changes in Germany’s waste sector between 1990 and 2006 reduced the country’s total GHG emissions by 5% , and this was in addition to the significant mitigation of methane emissions already achieved prior to 1990.

The IPCC sector estimates are necessarily carefully segmented to avoid any possibility of double counting. So their estimate also omits those emissions displaced through waste prevention, reuse, recycling and biogenic energy recovery, as these occur outside of the ‘waste sector’ – a point which has also been highlighted in a recent report prepared for Zero Waste Europe. An earlier study for the German government, using a life cycle approach, estimated that a 10-15% reduction in global GHG emissions could be achieved through improved solid waste management, including landfill mitigation and diversion, energy from waste and recycling.

Including waste prevention could further increase this estimate. An on-going UN project estimates that 1.3 billion tonnes of edible food waste is generated every year, representing one third of all food produced for human consumption. Prevention of this food waste would reduce total global GHG emissions by an amazing 9%: more than the total emissions of any country other than the US and China.

Overall, the GWMO concludes that the potential impact of improved waste and resource management on reducing GHG emissions across a broad range of economic sectors could be 15-20%.