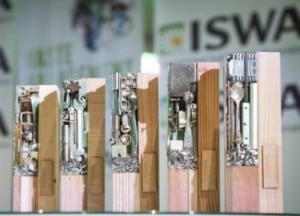 Professor David C Wilson and his co-authors Costas Velis of the University of Leeds and Ljiljana Rodic of Wageningen University have won a prestigious award from the Institution of Civil Engineers. DCW is particularly pleased that an overview paper on Integrated sustainable waste management in developing countries has been awarded, not as the best paper in the particular journal Waste and Resource Management, but as one of the four best papers published in 2013 across all 27 peer-reviewed ICE journals. Like all the winning papers, our paper is now free to download from the ICE website.

Solid waste management is often viewed as the ‘poor relation’ even among environmental topic areas, and then most attention is paid to ‘high-tech’ waste management in the West. So for an overview paper on sustainable waste management in developing countries to win this award from one of the World’s leading engineering institutions, in competition with papers on ‘hard’, mainstream engineering topics such as structures and bridges, is not just an honour for the authors but also an important recognition for the waste and resources sector and for work on appropriate solutions for developing countries.

Each year, the Institution of Civil Engineers (ICE) acknowledges the best work published in their 27 prestigious peer-reviewed journals at the ICE Publishing Awards ceremony, held in October at the historic Institution headquarters in Westminster, opposite the Houses of Parliament. ICE state that ‘We award authors from both industry and academia who have produced work judged by their peers to be of exceptional quality and benefit to the civil engineering and science community’. DCW’s paper in Waste and Resource Management has won the Telford Premium Award for the fourth best paper published across all ICE journals.

Perhaps the most important aspect of winning an award is that each winning paper is free to view on the ICE Virtual Library as part of ICE’s commitment to furthering knowledge and best practice in civil engineering. Access to ICE journals is normally by subscription only, so access to the papers is restricted – which is a particular drawback for a paper on waste management in developing countries, where even universities generally cannot afford journal subscriptions. So we are very excited that access to our paper is now ‘open access’.

DCW at the ISWA World Congress in Vienna

The ISWA World Congress 2013 will be held in Vienna from 7-11 October, with more than 1000 participants from over 70 different countries already registered. Professor David C Wilson is a member of the Scientific Committee, and will Chair two sessions as well as presenting two of his own papers and co-authoring a third paper. DCW’s two papers are Operator Models for Delivering Municipal Solid Waste Management Services in Emerging and Developing Countries, presenting results from a major project funded by German International Assistance (GIZ) in Session 3; and Benchmark Indicators for Integrated & Sustainable Waste Management (ISWM), reporting on recent progress with a major project to compare SWM performance in cities around the world, which he has been leading for the last five years (Session 23).

ISWA – the International Solid Waste Association – represents waste management professionals worldwide. It is a global, independent and non-profit making association, working in the public interest ‘To Promote and Develop Sustainable and Professional Waste Management Worldwide’. Its Annual Congress is one of the world’s most important congresses in the field of waste management.As a member of the Scientific Committee,

DCW reviewed papers submitted to the Congress’s Call for Papers on Electronic and Electrical Waste, and Chairs Session 19 on that topic. DCW is also Scientific Co-ordinator of ISWA’s Task Force on Waste and Globalisation and Chairs Session 53 which reports outputs from their work on Global Flows of Materials for Recycling. He is also co-author of a paper on waste management and recycling in Bishkek (Session 14) and of last year’s paper which has won the ISWA Publication Award 2013, which will be presented at the Gala Dinner.

The International Solid Waste Association (ISWA) presents an annual award to the best publication worldwide in the field of solid waste management. The 2013 ISWA Publication Award was announced today and was won by Dr Costas Velis, Professor David C. Wilson et al. for their paper: An analytical framework and tool (‘InteRa’) for integrating the informal recycling sector in waste and resource management systems in developing countries. The online citation stated that: ‘The (judging) panel believes that this paper addresses an important area of waste management in developing countries, i.e. the informal recycling sector; and that it offers a practical framework for designing successful initiatives to integrate the informal sector into formal waste management systems.’ The award will be presented at the ISWA 2013 World Congress in Vienna in October.

More background to this work and information of the framework proposed is available; while the paper itself is open-access. Professor David C Wilson is the Scientific Co-ordinator of the ISWA Task Force on Waste and Globalisation and Dr Costas Velis of the University of Leeds is a member; together they led the Task Force’s work stream on the informal recycling sector. The other co-authors of the winning paper are Ondina Rocca, Prof Stephen R Smith, and Prof Chris R Cheeseman of Imperial College and Antonis Mavropoulos of D-Waste Hellas.

The QS World University Rankings are widely regarded as the preeminent guide to the relative quality of universities from around the globe.  The 2013 subject rankings have been published this week, showing Imperial College’s Civil and Environmental Engineering Department as no 1. in the world, ahead of 2. Berkeley, 3. Tokyo, 4. Delft and 5. MIT.

David C Wilson has been a Visiting Professor in the Department since 2000, and is active in teaching and research on solid and hazardous waste management in both developed and developing countries, within the Water and Environmental Engineering section of the Department.

David C Wilson, Ljiljana Rodic and Costas Velis have published a major overview paper in this month’s Proceedings of the Institution of Civil Engineers, Waste and Resource Management, on Integrated Sustainable Waste Management in Developing Countries: Concept, Realities and Challenges. The data presented show that the waste management performance of developing country cities has improved significantly over the last 10 years. Levels of collection coverage and controlled disposal of 95% in middle-income, and 50% in low-income, countries are already commonplace. Recycling rates of 20-30% are achieved by the informal sector in many lower income countries, at no direct cost to the city – presenting a major opportunity for all key stakeholders, if the persistent challenges can be resolved.

UPDATE 05 June 2014. This paper has won an ICE Publishing Award, and is now free to download.

This paper uses the lens of ‘Integrated sustainable waste management’ (ISWM) to examine how cities in developing countries have been tackling their solid waste problems. The history of related concepts and terms is reviewed, and ISWM is clearly differentiated from integrated waste management (IWM), used mostly in the context of technological integration in developed countries. Instead, ISWM examines both the physical components – collection, disposal, recycling – and the governance aspects – inclusivity of users and service providers; financial sustainability; and coherent, sound institutions underpinned by proactive policies.

The evidence suggests that efficient, effective and affordable systems are tailored to local needs and conditions, developed with direct involvement of service beneficiaries. Despite the remaining challenges, evidence of recent improvements suggests that sustainable solid waste and resources management is feasible for developing countries.

The paper builds on substantial recent research by DCW and his colleagues. Other papers compare the performance of a sample of 20 cities around the world; and provide a framework for designing city-specific initiatives for the inclusion of the informal recycling sector within a municipal solid waste management system. Professor David C Wilson is at Imperial College London; Dr Ljiljana Rodic at Wageningen University and Research Centre, the Netherlands; and Dr Costas Velis at the University of Leeds, UK.